Another rich and tasty favorite from Ottolenghi’s Jerusalem cookbook.

Preheat your oven to 500F. Slice one of the eggplants in half lengthwise and set aside one of the halves. Pierce the whole and remaining half eggplant a few times and place in the oven. Let cook for about 20-25 minutes. When blackened or soft remove from oven and let cool. If the eggplant hasn’t begun to char, the put it directly on a burner with a flame and rotate until evenly charred.

Dice the raw half of eggplant into a small dice. In a large sauce pan or soup pot, drizzle a little olive oil and fry the eggplant over medium heat. Stir a couple of times, so most of the sides brown. Remove from heat and set aside.

In a small sauce pan, melt the butter over medium heat and add the couscous. Stir and toast it until it browns. Watch closely, as it will turn dark and burn quickly. Add enough water to cover by 1 inch, a sprinkle of kosher salt and bring to a boil. Cook until just softened, about 8 minutes (depending upon your brand). Drain and set aside.

Remove the cooked eggplant flesh and add to the tomato base. Using an immersion blender, blend the soup until mostly smooth. Reheat gently and add salt and pepper to taste.

To serve, ladle into bowls and garnish with the fried eggplant and herbs. Serve the couscous in a bowl alongside, allowing everyone to scoop out what they’d like.

From Ottolenghi via What’s Cooking. 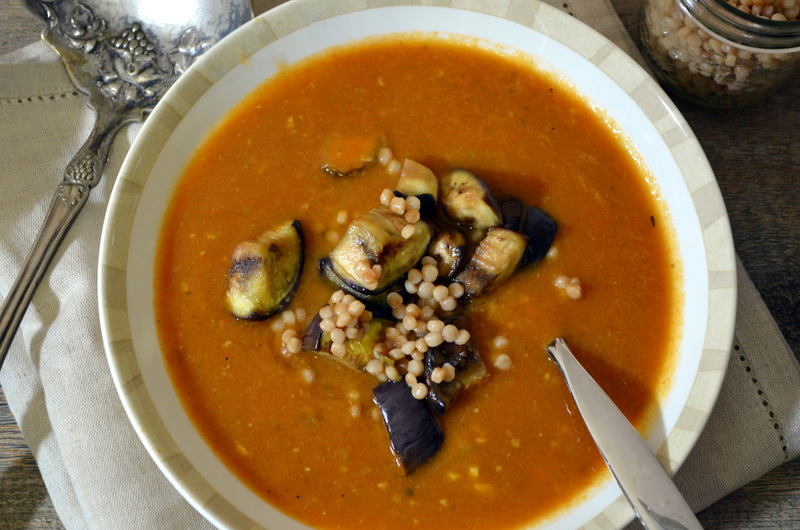